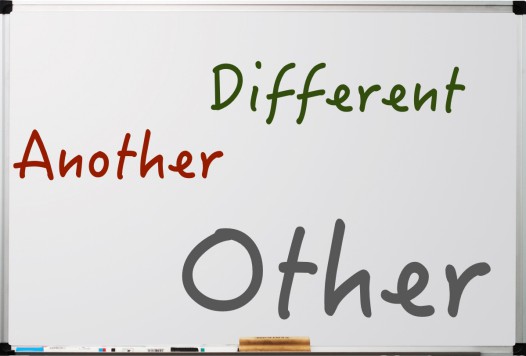 Many learners of English confuse the words another, other and different. They often use another instead of different, and other instead of another. In this post, I’m going to clarify the differences for you.

The words another and different are very similar in meaning and they can often be used interchangeably.

However, the word another also means ‘one more’. In this meaning, we cannot use different:

The lesson hasn’t finished yet. We have another hour.

These are different times.

There is a small subtle difference between another and different, which could be confusing for many learners. The word different means that something is ‘not the same’. The word another means ‘some other’:

Let’s meet another time. (= some other time)
Let’s meet a different time. (= not the same time that we arranged)

In the above example, the difference is very subtle. It is a question of feeling the most suitable word to use in the context. However, we cannot use another without a following noun. We can only say different:

However, when we are talking about one of two things of the same type, the word other can be used with the article the or a pronoun (my, you, his, her, etc.) before a singular noun, for example:

For a change, let’s go to the other cafe today.
Don’t buy that phone. Buy the other one.
“Is that his younger sister?” “No, that’s his other sister.”