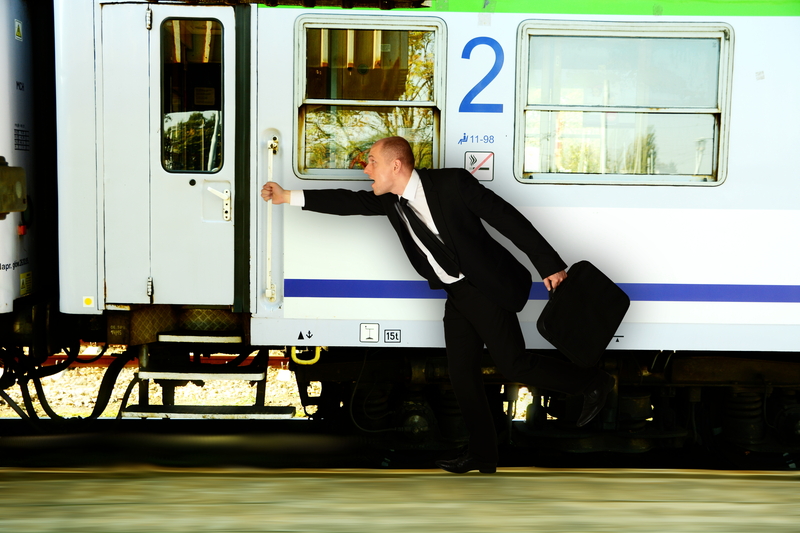 Look at the picture above. Did this man arrive on time or in time? We use both the expressions on time and in time to mean ‘not late’. However, we use them in slightly different ways.

When we say in time, we are thinking about some event, for example a train departing, a football match or a dinner party. So if you arrive in time, you arrive before the event starts. Here are some examples:

As you may notice, we often use in time after the word just (= a short time ago) and before the word for.

The phrase on time implies that there is some deadline or appointment. For example, if somebody says I got there on time, it could mean that they were not late for an appointment. With on time, we are thinking more about a specific time. Here are some more examples:

We can also use on time in a general sense, to say that someone is never late for meetings, appointments, etc. For example:

We often say right on time, to mean ‘at the correct time; no later than the specified time’.

Back to the picture

So, did the man arrive on time or in time? Well, if we look carefully, it looks like he arrived after the scheduled departure time because he’s running to catch the train. So we cannot say he arrived on time because he’s late. However, he managed to catch the train just before it departed. Since we are thinking about the event (the train departing), it would therefore be correct to say:

He arrived just in time.

Reading explanations alone won’t help you improve your speaking. Try to listen carefully to native English speakers as much as possible. Whenever you hear them using on time or in time, try to observe how they use each phrase and what other words they use (e.g. just, for, right).